The Perseid Meteor Shower (or Outburst as it is sometimes known) occurs tonight as it does each year at this time, but tonight's display is predicted to be  especially brilliant. To learn more, click here.  It will last a few more days, but unfortunately the Space Alien has business in Chicago this week, where haze and light pollution diminish visibility.


The Perseid Shower may be found by Earthly viewers in the constellation Perseus (see picture below), named for the heroic son of the Greek God, Zeus.  Perseus grew up in an extremely dysfunctional family (about which perhaps more some other time). His main claim to fame was finishing off the Gorgon Medusa.

The Gorgon Medusa was an ill-tempered female creature whose perpetual bad hair days may have been at the root of her unpleasant nature and general lack of good  sportsmanship.

The entire story of Perseus' life is far too violent for these pages, but curious readers wishing to know more (but not at bedtime as the Space Alien cannot be held responsible for resulting nightmares) may click here.

Suffice it to say that Perseus was a nice enough fellow who seemed unable to avoid difficult, dangerous and even compromising situations.


The Space Alien always liked hanging out with Perseus and Andromeda.  Those were happy days!

Now Perseus and Andromeda are together where you can visit them in the Summer Sky at night!  The Space Alien is happy for them. 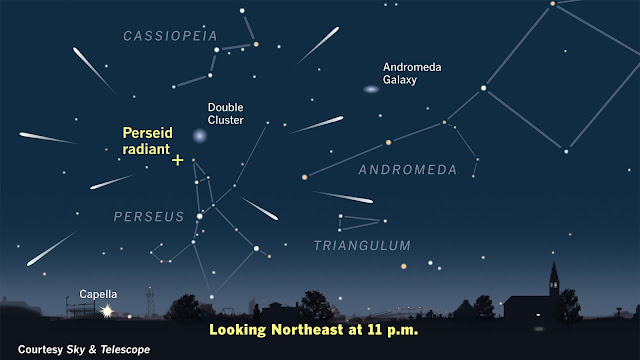 As for the Perseid Meteor Shower, this is composed of debris from comets, mostly particles of dust and rock.  To learn more, click here.  The Space Alien misplaced some keys recently.  Perhaps they'll turn up in some of that debris.  It's worth a look!
Posted by Joan Levin at 4:41:00 PM
Newer Post Older Post Home