A New Year for the Space Alien

The Space Alien was sitting in an easy chair deeply immersed in Rashi's Commentary on the Book of Genesis and pondering the meaning of tohu v' bohu (without form and void.  Genesis, 1:2).

All of a sudden it happened!  A loud pop!  The Space Alien, thinking it might be children playing with one of those awful toy cap pistols, went to a window, and saw in the distance a huge fiery ball surrounded by smoke.

The Space Alien lost no time in grabbing a camera and rushing outdoors to give that fiery ball a closer inspection.  Could it be true?  Could it possibly be true?  And it was true!


THIS WAS THE BIG BANG!


Tears of joy ran down the Space Alien's cheeks.  The Big Bang would mean a UNIVERSE!  A universe full of flowers and trees and majestic mountains and silvery minnows swimming in crystal streams.  A universe with delightful birds and wondrous reptiles and funny furry creatures and eventually HUMAN BEINGS to commune with.   What a delight this would be!

The Space Alien checked the calendar on an Apple Watch.  Why, today was Rosh Hashanah!  What a remarkable coincidence that the Big Bang would occur today, on the Birthday of the World, thought the Space Alien, and picked up the phone to order a dozen honey cakes to be delivered immediately.

The Space Alien would like to wish you, loyal readers,

THE MAILBOX:   This post has received an outpouring of mail which the Space Alien is working hard to answer.  Here are some responses to date:

1.  A Loyal Reader pointed out that the photograph of the Big Bang was actually one of a Spiral Galaxy. To this the Space Alien simply replies: "Was you dere, Charlie?"  (For documentation about the appropriateness of this response, please  click here.)

2.  Another Loyal Reader asked what camera the Space Alien used to take the picture of the Big Bang. The Space Alien took this photograph with a Kodak Brownie Point and Shoot.  The Space Alien considers those who use light meters and cameras with manual focus, f stops, and adjustable shutter speeds to be show-offs.

3.  The same Loyal Reader, a regular question box, wanted to know if the Space Alien had a recipe for Tofu v'Bok Choy (mistaking this for "tohu v'bohu" as explained above.)   This Loyal Reader claimed their recipe to be over 6000 years old and indecipherable. The Space Alien regrets not having this recipe, but hopes Loyal Readers will enjoy instead this easy-to-read and (as one can clearly see) delicious baked cookie recipe. 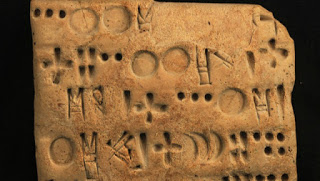 4.  The above Loyal Reader, originally seeking a legible recipe for Tofu v'Bok Choy (which the Space Alien unfortunately did not have on hand), now complains that the Camel Milk Butter (softened) called for in the above recipe is "hard to track down."    Really, Loyal Reader, haven't you heard of substitutions?  Yak Milk Butter is routinely used by our loyal readers in the high plains of Tibet, and Tiger's Milk (from the '70's) makes a lovely butter sure to please the whole family.

5. Another Loyal Reader, a formidable maven in the kitchen, gently chastised the Space Alien for sending out for honey cakes.  Homemade ones are far superior says this Loyal Reader.  The Space Alien, taking this observation to heart, enrolled in the Cordon Bleu in Paris with a concentration in Jewish Holiday cooking with Special Guest Lecturer Joan Nathan.  Hopefully by next Rosh Hashanah the Space Alien will be turning out delicious honey cakes to share with all the Loyal Readers.

[Editor's Note 1: The Space Alien graduated from the above cooking program with highest honors.  Unfortunately while returning from Paris at tachyonic velocities exceeding the speed of light, the honey cake recipe floated out of the Space Alien's exclusive Power Tote Bag, and is now presumably somewhere in space.  If any Loyal Reader finds it, please return it to the Space Alien ASAP. ]

[Editor's Note 2:  Because of the difficulty in finding exactly the right honey cake to share with our Loyal Readers, the Space Alien would like everyone to enjoy this New Year tradition of an apple (preferably organically grown, like the one in the picture) dipped in honey (a lovely gift from another Loyal Reader) to begin the year in sweetness and good health!] 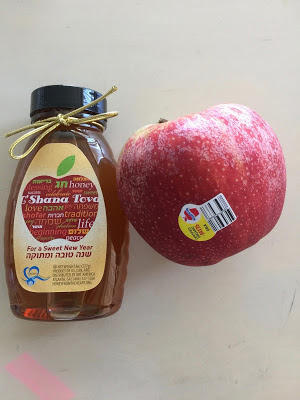