The Cubs are World Champions! (With Some Help from Cubby Bear and the Space Alien)

Game Seven of a hard fought World Series between the Chicago Cubs and the Cleveland Indians found the Space Alien in Cleveland.  It was an exciting game and the Space Alien gave a special cheer as 39 year old* Catcher David Ross, now playing his last game before retirement, became the oldest batter to hit a home run in a World Series game.

"Let's hear it for the Oldies!" cheered the Space Alien with uncommon gusto having worked through the disappointment of being unable to replace this retiring athlete as a Cubs catcher (q.v.).

But while the Cubs played brilliantly, by the 8th inning they had ceded an early lead to the Indians, worrying even the most optimistic fans.

At the top of the 9th Inning the Space Alien sensed the presence of a furry friend nearby.  And there, extending a trembling paw, stood Cubbie Bear, nearly in tears!

"Yes," whimpered Cubby Bear "but the score is tied now and I'm worried!"

"But you must cheer!" said the Space Alien.  "Cheering is your special responsibility!  The Cubs cannot win if you do not cheer!"

"I  know," cried Cubby Bear "but I'm so exhausted from worrying!  How can I cheer if I'm not cheerful myself?"

The Space Alien let Cubby Bear whimper his deepest concerns, and then spoke softly: "Cubby Bear, you have helped  your team in countless ways!   Now you must cheer for your team and know that whatever happens you have done your best!"

Cubby bear did so, leading the fans in exuberant cheering!  Their cheers  were so loud -- and so cheerful -- that the Cubs did better than their best! In fact, cheered by Cubby Bear and the fans, the Cubs WON with a great big W!!!

Yes, the Cubs won the World Series, becoming the champions of the world and, as far as the Space Alien knew, the entire universe as well!  Encouraged by the Space Alien, the energetically cheering Cubby Bear had helped bring about that victory! 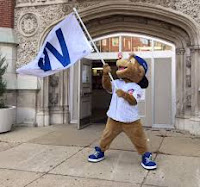