While enjoying a swim in the River Nile during an Egyptian holiday, the Space Alien was astonished to see a small basket floating along, tilted on its side.


The Space Alien was even more astonished to see a tiny hand emerge as the listing basket began to empty its contents into the churning waters of that historic river.

The Space Alien quickly swam alongside, gently grasped the tiny hand, and withdrew a tiny baby from the muddy water.

Fortunately the Space Alien had brought along two large, soft, white beach towels with blue stripes, and carefully tipped the muddy water out of the basket and wiped it clean with one of them.

Then the Space Alien carefully wrapped the tiny baby in the second white beach towel with the blue stripes, and gently placed him back in the basket.(Curious loyal readers may scroll to the very foot of this post for more information about why, when traveling, the Space Alien carries at least one towel.)

The tiny baby, now cozily swaddled in the white beach towel with blue stripes, gazed calmly into the eyes of the Space Alien and spoke:


"My name is Moses," said the tiny baby "and I  thank you for rescuing me!  I haven't learned to swim yet, and I thought I was a goner for sure and would never fulfill my great destiny."

"It was my pleasure," said the Space Alien, "but why are you out here all alone on the river?'

"The ruler — they call him Pharaoh -- wanted to kill little boys like me, so my Mom put me here for safety.  She knew Pharoah’s daughter, the Princess, would see how cute I was and rescue me when she came to the river to wash up.  And see - there she is now!"

"And look," continued the tiny baby, "there's my sister, Miriam, ready to help the princess find a baby sitter who would actually be my Mom!    Everything is all planned and you can even read about it in your Bible in the first two chapters of the Book of Exodus."  (Q.V.)

The Space Alien looked up and, indeed, saw the women standing nearby.

The Space Alien nodded in agreement, and then, swimming under the roiling water of the Nile, carefully pushed the basket until it was close to the shore where the women were standing.

"Goodbye, Baby Moses!" said the Space Alien softly, positioning the basket near the reedy bank.  "Be a good boy, fulfill your great destiny with integrity, and always tell the truth."

The Space Alien waited as the Princess and Moses' sister Miriam, who would love and care for Moses, retrieved him, and watched them wrap him once again in the large white beach towel with the blue stripes.

Then, murmuring "My work here is done,” the Space Alien was soon aloft, traveling through time and space at tachyonic velocities exceeding the speed of light, to the headquarters of the Space Alien Gazette, where Your Editor was waiting.
"Where were you?" asked your editor when the Space Alien returned, "and how did your lovely white beach towel with the blue stripes get so wet and muddy?  And where is the other one?"

"I can explain..." began the Space Alien, but Your Editor impatiently interrupted.  "Oh  we don't have time for another of your 'bubbe meises' (Q.V.) now.  You need to hurry  and get cleaned up.  Tonight is Pesach and our Seder is about to begin!"

The Space Alien carefully rinsed the mud of the Nile from the large white beach towel with the blue stripes and hung it up to dry, briefly wondering how Baby Moses would use the other identical one in later years, and then hurried to take a seat at the lovely Space Alien Gazette Passover Seder!

What a wonderful Seder it was, with the entire staff of the Space Alien Gazette and their families and friends.

Here is one of the Space Alien's exclusive photographs:


The Space Alien happily participated in the Seder, munching on matzos while reading the thrilling account of how Moses grew up to become a great leader who guided his people to freedom, and smiled recalling the thrilling rescue of the tiny baby on the River Nile. 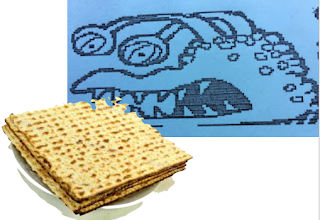 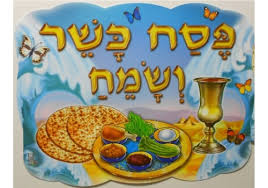 Whatever holiday you may be celebrating at this season, or simply to welcome the arrival of Spring,  The Space Alien, your editor, and the entire staff of the Space Alien Gazette would like to wish all of our Loyal Readers good health and much happiness.

1. Sung by Tova Ben-Zvi in Sabbath and Holiday Songs:

2.  Sung by Shura Lipovsky in Moments of Jewish Life:


3. Sung by Lori Cahan Simon in Songs my Bubbe Should Have Taught Me, Volume 1, Passover:

4. Sung by schoolchildren at Kinneret Day School in New York:

And here are the words so you can sing it too!

Words are by the beloved Yiddish poet Avrom Reyzen (Q.V), and the music is by the similarly beloved composer Mikhl Gelbart (Q.V.).

And the wavelets move quietly, they move gently and softly,
As if to keep from harming the little child. 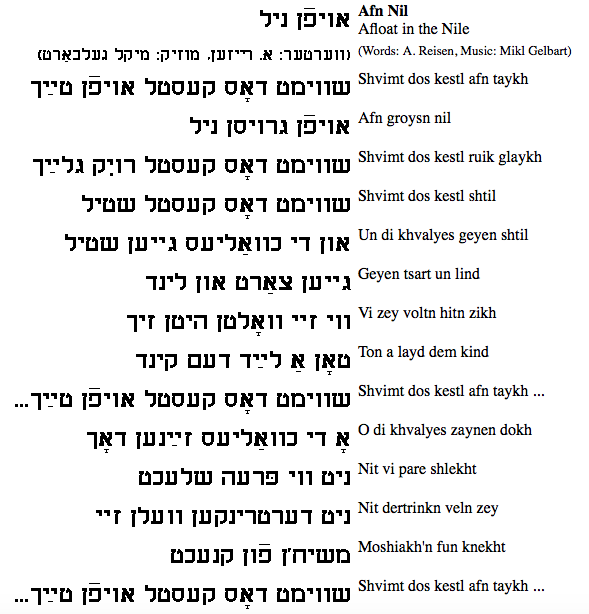 (You may also find this at http://www.yv.org/peysakh.html and scroll down a bit. )

The Space Alien, an avid reader of science fiction comedy, was profoundly influenced by The Hitchhiker's Guide to the Galaxy by Douglas Adams which appeared in the 1970's as a radio comedy and was since published in many other forms including novel and film.  https://en.wikipedia.org/wiki/The_Hitchhiker%27s_Guide_to_the_Galaxy.

The Space Alien, always on the lookout for practical advice, found the following passage from Chapter 3 of this book to be eminently sensible and strongly persuasive:

"A towel is about the most massively useful thing an interstellar hitchhiker can have. Partly it has great practical value. You can wrap it around you for warmth as you bound across the cold moons of Jaglan Beta; you can lie on it on the brilliant marble-sanded beaches of Santraginus V, inhaling the heady sea vapours; you can sleep under it beneath the stars which shine so redly on the desert world of Kakrafoon; use it to sail a miniraft down the slow heavy River Moth; wet it for use in hand-to-hand-combat; wrap it round your head to ward off noxious fumes or avoid the gaze of the Ravenous Bugblatter Beast of Traal (such a mind-bogglingly stupid animal, it assumes that if you can't see it, it can't see you — daft as a brush, but very very ravenous); you can wave your towel in emergencies as a distress signal, and of course dry yourself off with it if it still seems to be clean enough.
"More importantly, a towel has immense psychological value. For some reason, if a strag (strag: non-hitch hiker) discovers that a hitchhiker has his towel with him, he will automatically assume that he is also in possession of a toothbrush, face flannel, soap, tin of biscuits, flask, compass, map, ball of string, gnat spray, wet weather gear, space suit etc., etc. Furthermore, the strag will then happily lend the hitch hiker any of these or a dozen other items that the hitch hiker might accidentally have "lost." What the strag will think is that any man who can hitch the length and breadth of the galaxy, rough it, slum it, struggle against terrible odds, win through, and still knows where his towel is, is clearly a man to be reckoned with."

— Douglas Adams, The Hitchhiker's Guide to the Galaxy
And see: https://en.wikipedia.org/wiki/Towel_Day

This is why the Space Alien likes to carry a towel while traveling away from the offices of the Space Alien Gazette, and strongly recommends this practice to loyal readers as well.