"What's wrong?" asked Your Editor.  "It's almost Hallowe'en!  You should be thinking about your costume!"

"I know," said the Space Alien, "but I'm feeling sad and a little conflicted as well."

"Tell me," said Your Editor, drawing up a chair. "Maybe I can help."

And you, Loyal Reader, may about this here:
https://www.nasa.gov/press-release/nasa-missions-catch-first-light-from-a-gravitational-wave-event

And read more about this here:
http://www.cnn.com/2017/10/16/world/neutron-star-collision-gravitational-waves-light/index.html

"I've read a little about neutron stars from collapsed supernovas at https://en.wikipedia.org/wiki/Neutron_star," said your editor,
"but why is this making you so sad?"

The Space Alien hesitated a moment, and then blurted out:

"Because that collision was partly my fault and it could hurt a lot of people!"

"Your fault?  How could that be?  It happened millions of years ago!" exclaimed Your Editor.

The Space Alien looked even more unhappy.  "You knew I had a life before we met, didn't you?"

"Yes, you had mentioned that," answered Your Editor, "but you've never told me much about it, and anyway, how does that relate here?"

"Way back in the day I organized teams to play 'Ultimate Supernova.' We tossed nebulas and neutron stars just for fun like you do with your Frisbees!  Here's an old photo of me tossing a bit of a supernova!"

"We laughed when we made the supernovas collapse producing neutron stars that would bump into each other," continued the Space Alien.  "The gravitational waves tickled us, and they made lots of funny noises!"

"But that was long ago and far away," said Your Editor.

"True," agreed the Space Alien, "but the results of our youthful indiscretions have reached the earth, producing produce gamma rays that could wipe out everyone here!"

"I read it on Twitter," said the Space Alien, pulling out a Smart Phone.  "Here's a tweet by astrophysicist John Preskill of the California Institute of Technology, who has studied similar phenomena for decades!"  ( QV: http://www.theory.caltech.edu/~preskill/pubs/preskill-1982-catalyzed.pdf).

"It appears that these collisions produce many things," said Your Editor, "including precious metals!  I read about this at:   https://www.cbsnews.com/news/gravitational-waves-neutron-star-collision-ligo/ "

"We still don't know exactly how this will affect us," continued Your Editor, "but we're still here, so why don't you get to work on your Hallowe'en costume!"

"I thought I'd wear this t-shirt!" said the Space Alien.  "I found it online at our store!  Don't you think it's me?"

"That's not really a costume," said Your Editor.  "A costume is about pretending to be someone else."

"Well, last year I played 'Trick or Treat' pretending that I was really you dressed up as me," answered the Space Alien, "and, as I recall, you didn't like that very much!"  (And you, Loyal Reader may read more about this at: http://spacealiengazette.blogspot.com/2016/10/the-space-alien-celebrates-halloween.html)

"I remember that," said Your Editor.   "You created havoc at Hallowe'en parties and told everyone that you were me, Your Editor,  dressed up as you.  And that pumpkin juggling thing you did;  I never heard the end of it!"

"I was just having fun and the children LOVED it!" said the Space Alien.

"Well, it made an awful mess," cried Your Editor, "and everyone thought it was me!"

"Humph," snorted the Space Alien.  "I know you are my editor, and I appreciate that, but if you want my opinion you need to lighten up!"

"When I want your opinion I'll ask for it!" muttered Your Editor.

They sat in silence for a moment.

"Hey," said the Space Alien, "why don't we go to the Space Alien Gazette Hallowe'en party dressed as supernovas?  We can do a new dance -- the Colliding Supernova Cha-Cha-Cha!"

"You're on!" said Your Editor. "Let me grab my dancing shoes!"

And you, Loyal Readers, are all invited too!  Be sure to wear a costume!

While this article does not explain how this phenomenon occurs, that stars DO collide to make gold is beyond dispute, as is clear from the result of a collision between two well-known stars, Richard Burton and Elizabeth Taylor.

"Where have you been," cried Your Editor.  "You've been missing for days, and what is that hat you're wearing?"

"I've been in Sweden," said the Space Alien, "and I had a wonderful time.  The food was great and they put it all out on a table for you to have as much as you want!   They call it 'smorgasbord' and I call it perfect!"

"Is that all you did in Sweden?" asked Your Editor.

"Oh no, I met the King.  His name is Carl XIV Gustaf and he very much wanted to give me a Nobel Prize, but could not figure out which category because so many would have been appropriate.  But I got to watch the ceremonies!"

"The Nobel Prize in Economics," continued the Space Alien, "went to Professor Richard Thaler, a Behavioral Economist at the University of Chicago, who explored the interplay between economics and psychology.  It was all very exciting and of course I offered Professor Thaler my warmest congratulations!"

"Here's my selfie with Professor Thaler at a big party they gave him when he got back to the University of Chicago.  I was his special invited guest!"


"Really!" huffed Your Editor.  "I studied at the University of Chicago with another Nobel Laureate in Economics but I was never invited to a special party!"

"Well, don't grumble about it," said the Space Alien.  "Your I.Q. probably isn't as high as mine but I know you got along as best you could!  I'm sure you were a perfectly adequate student."

This did not sit well with Your Editor, but the Space Alien hardly noticed.

"Of course they would!" answered Your Editor. "I would too!"

"But what if we charged the same price but printed fewer pages.  Would as many complain?"

"Most likely not; I don't think most of our Loyal Readers would even notice!"

"I guess not," answered Your Editor.

"What if you paid a lot of money to see a show but the weather was terrible, and there were no refunds on tickets.  Would you manage to get there anyway no matter what?"

"Of course!  I paid for it so I'd want to see it no matter how hard it was to get there!"

"What if you had been given free tickets for the same show?"

"I guess not," said Your Editor.

"What if it were raining and the umbrella dealer on the corner raised the price of umbrellas that day."

"That would be so unfair!" cried Your Editor.  "I'd be angry and would never want to buy anything from him again!"

"But what if his price was always a few dollars higher but he had special 'sunny day' sales when it wasn't raining?"

"Oh that would be ok," answered Your Editor.  "I'd welcome a chance to buy a nice umbrella at a discount!"

"I guess not," said Your Editor.  "I see what you mean - we make economic choices based on irrational factors, and maybe that 'rational man' we learned about in our economics classes doesn't even exist!"

"Exactly," said the Space Alien, "and Professor Thaler has studied the effects of psychological factors on economic decisions.  But now I must leave because Professor Thaler is waiting for me to work with him on his next book!"

The Space Alien Runs a Marathon

"What are you looking at?" she asked.

"These are my photographs from Marathon!" said the Space Alien.

"You got them developed so fast!" cried your editor.   How did you do that?

"These are not from the 2017 Chicago Marathon the other day," said the Space Alien. "They are from the real Marathon, the first one, where in 490 B.C. a soldier named Pheidippides ran about 26 miles from a battlefield near a village called Marathon all the way to Athens to let the Athenians know that the Persians had been defeated there."

"You were there?" asked your editor.


"Of course," said the Space Alien.  "Pheidippides was so brave, and in such a hurry to get the news to the worried Athenians.  I told him 'Look, Pheidippides, you need to take a little rest -- it's such a hot day!  Sit in the shade for a bit and have a drink of water.  Here, you can share mine!'  but Pheidippides was in such a hurry and wouldn't stop, and the poor fellow died right after he delivered the news!"

"What a sad story," said your editor.

"Some people don't think this is true," said the Space Alien, "but I'm pretty sure it's not fake news, because I was at Marathon with the Athenians.  Pheidippides was a runner for the Athenians delivering all sorts of messages between Sparta, Athens and other places, as well as Marathon."

And here, loyal reader, is more information about that:  https://www.awesomestories.com/asset/view/Legendary-Runner-of-Marathon-Pheidippides

"And you say you were with him when he made that famous run in 490 B.C.?" asked your editor, incredulously.

"Yes," answered the Space Alien.  "But while some of my Marathon photos survived, it was so hot that day that the film melted in my camera when I tried to take a selfie.  So I don't have any pictures of me with Pheidippides.  You'll just have to believe me!"

As your editor nodded sadly, the Space Alien picked up a battered cell phone.

"Just look!   Here I am competing in the 2017 Chicago Marathon!  Some onlookers took these pictures and kindly shared them with me!" 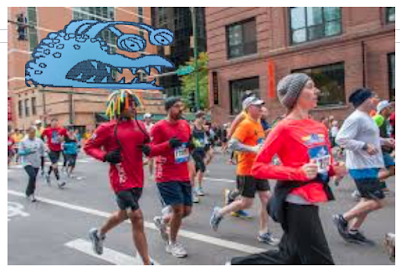 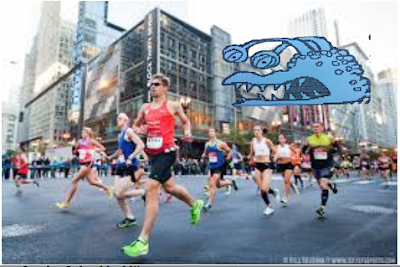 "Well you aren't exactly running," said your editor, "but how did you do?"

"Oh, I was careful not to travel at my customary tachyonic velocities exceeding the speed of light, or even at the more sluggish supersonic speeds.  I didn't want to scare anyone with the sonic boom or break windows, so it took me as long as ten minutes to finish the course!"

"Well that sounds like a winning time" said your editor.  "Did you get a medal?"

"Not exactly" said the Space Alien.  The judges didn't notice when I crossed the finish line, and somewhere along the way I lost my bib number.   I think it may have been when I stopped to eat."

"You had time to eat?" asked your editor, incredulously.

"Sure!  I had a taco, some pizza, a plate of blintzes, and some pierogi, dolmades, corn bread,  a few samosas, sushi, wonton and even some lovely crepes suzettes!


"There were so many great foods in the neighborhoods along the way," exclaimed the Space Alien, "but I think I may have used my bib number for a napkin."

"I've noticed you often like to eat and run!" said your editor.  "But you still crossed the finish line first!"

"Of course!  Will there be a story about me in the Space Alien Gazette?"

"I'll discuss it with our Sports Editor," said Your Editor, "and we'll see!"