This weekend the Space Alien honors the brave American Astronauts who were the first men on the Moon fifty years ago.

Loyal Readers, especially younger ones, can read more about this in many places, including:  https://www.space.com/16758-apollo-11-first-moon-landing.html

The Space Alien traveled independently at a respectful distance from the Apollo 11 spacecraft carrying U. S. Astronauts Neil Armstrong, Michael Collins and Edwin "Buzz" Aldrin to the Moon. 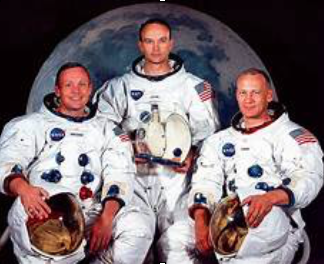 While not qualifying as an astronaut, the Space Alien was proud to have been included in this historic event, as shown in this photograph, exclusive to the Space Alien Gazette. 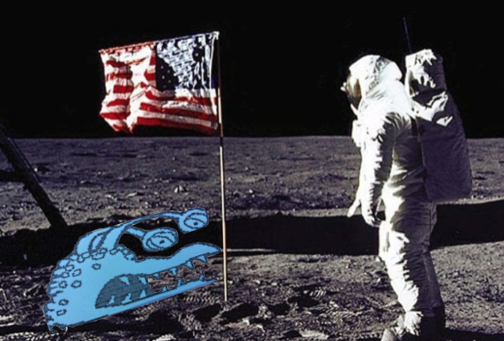 Note: A Loyal Reader reminds us that Lieutenant Armstrong was famously taciturn after his journey, and suggests that it is therefore not surprising that he never mentioned the extra subject who snuck* into one of his previously unprocessed photos, and further notes that nobody ever asked.

And this same Loyal Reader also found it not surprising that Buzz Aldrin, always focused on the task at hand, noticed nothing but the flag as he saluted!

This is why Your Editor recommends that Loyal Readers rely on the Space Alien Gazette as their most reliable source of unreliable facts!
____________

*Loyal Readers questioning the use of "snuck" as the past tense of the verb "to sneak" can explore this important grammar point here:
https://www.dailywritingtips.com/sneaking-up-on-snuck/
While Your Editor remains uncomfortable with "snuck" she will leave it stet.
Posted by Joan Levin at 11:12:00 PM
Newer Post Older Post Home